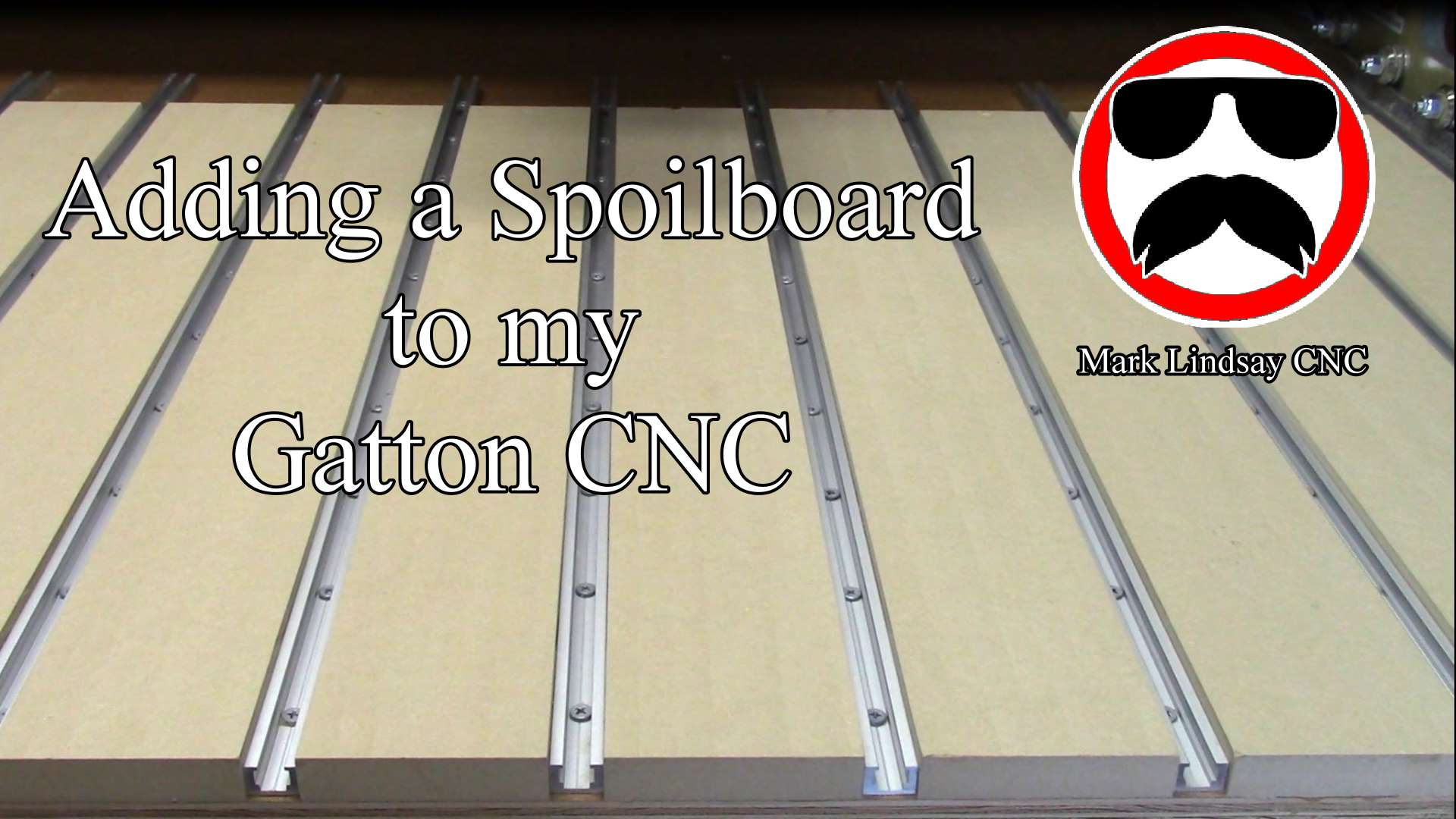 One of the final steps I needed to take before putting my Gatton CNC into service was laying down a spoilboard. [expand title=”Read More”]

What is a Spoilboard?

A spoilboard can be as simple or as complex as you want to make it. It can be as simple as a sheet of material clamped or screwed down to the CNC table. It can be made more complex by adding t-track, threaded inserts, holes for registration pins, indexing straight edges, and more.

At it’s most basic level, it’s simply there to raise the work material so that when a bit or end mill cuts through it, the CNC table doesn’t get damaged.

There are several things to take into consideration when designing a spoilboard. Chief among them is how you’re going to use your CNC. If you’re only doing laser engraving, you may not need to add a spoilboard at all. If you’re running a router or spindle, however, you’ll want to add one.

Most spoilboards incorporate a method of mounting a piece of work material to it. Threaded inserts or t-track are the most common methods used, however there are some who include provisions for adding offset clamps, wedges, and other means of fastening work material to it.

Another factor in the design process is the size of your table, and the limits of your machine. You should measure not only the physical size of the table, you should also measure and mark out the cutting capacity of both your X and Y axes to get a clear idea of just how large of a spoilboard you’ll need to make. Once you have those dimensions, record them so you can refer to them when it comes time to start building.

When I started designing my spoilboard, I knew that I wanted versatility. I went back and forth over whether to use t-track or threaded inserts for several weeks. I plan on making and using several jigs and fixtures, and I wanted to be able to mount them easily and accurately. For that reason, I opted to go with t-track, as it seems to offer more mounting locations than threaded inserts will. I then got online and did some comparison shopping. I decided to go with 36” long sections of t-track from Orange Aluminum. I’ve placed a link to Orange Aluminum at the end of this article.

I decided to mount the t-track straight to the table’s surface, and fill in the areas between the pieces of t-track with 3/4” thick MDF. MDF is reasonably priced, readily available, and machines smoothly. Most folks opt for MDF, however I have seen some spoilboards made out of plywood. The choice is 100% yours.

I then needed to know what size of spoilboard to make. In the video linked below, I show how I mounted a felt tip pen in my router, and used it to mark a line on the CNC table from one side to the other along my X axis. I moved the Y axis back until it was 1/8” away from triggering the rear limit switch, then put the pen in my router, using the 1/2” collet. I moved the X axis to the right until it triggered the limit switch, then I ran the X axis to the left until it triggered that limit switch. That drew a line across my table, parallel to the X axis.

The length of the line the felt pen drew gave me my absolute max limits in X. It also showed me exactly where the center of a bit or end mill would be, in relation to the aluminum angle, when the limit switches were triggered. In my case, the center of the bit or end mill would be approximately 1/4” away from the aluminum angle at the edge of the table when the limit switch was triggered.

The t-track I ordered is just under 3/4” wide. I wanted to place a piece of t-track right up against the aluminum angle at the edge of the table on each side, and butt a strip of MDF right up against it. With the limit switch being triggered 1/4” away from the aluminum angle, that would put the right edge of that strip of MDF 1/2” to the inside of my max X axis limit. I knew then that I could surface the entire width of my spoilboard without hitting an X axis limit switch.

With those measurements taken, I went back to the model of my CNC table in SketchUp.

Orange Aluminum has a measured drawing of its t-track on their web page, so I jotted down the measurements, and drew several sections of it into SketchUp. I didn’t put a lot of detail into the t-track drawing, but I did get the critical measurements.

With the t-track drawn in and located at the edge of the cutout and beside the linear rail, I measured from the centerline of one to the centerline of the other, divided that measurement by 2, then added a third piece, centering it between the first two. See the photo below.

I then added a few more pieces of t-track in the area behind the cutout, and arranged them so that I’d have enough to be able to mount just about any fixture or jig within that cutout. I finally settled on mounting 7 pieces of t-track in that area, then drew MDF strips to fill in the spaces in between the t-tracks. With the design finalized, I went out to the shop and started work.

I know that the way I mounted the spoilboard will freak a few people out. I’ve anticipated some of the questions I’m sure to get, and I’ll answer them right now.

Q. Why did you glue the MDF down? What are you going to do when it’s time to replace one?

A. I’ll answer that question with a question: Why would I want to replace one? When the surface gets too scarred up or full of holes, I’ll surface it. When it gets surfaced down to the point that I’m close to hitting the t-track with the bit, I’ll glue a strip of 1/2” MDF on top of each strip, then surface them.

Q. Why did you screw the MDF down from the top? Why not screw up from the bottom?

A. It’s a simple matter of access. It was easier to drive screws on top of the spoilboard than to crawl under the table.

Q. But now you have a bunch of holes in the spoilboard!

A. So? It’s a spoilboard. It’s sacrificial. It will get cut up, drilled into, have screws driven into it, and basically get messed up. That’s its job.

If that doesn’t cover the questions, feel free to add yours in the comment section below.

In the video below, I show some of my design considerations, how I made the cutout in the table, then how I mounted and surfaced the spoilboard.

My next video will go over how I created the toolpath in VCarve Pro to surface my spoilboard. It looks intimidating, but it’s not as difficult as you think.

Here are some links to some of the supplies I used to mount the spoilboard to my Gatton CNC:

As usual, if you have a question or comment, leave it in the comments section below. Or, if you’d prefer, go over to the Contact Us page and submit it to me there.

Until next time, take care and have fun!

2 Thoughts on “Adding a Spoilboard to my Gatton CNC”